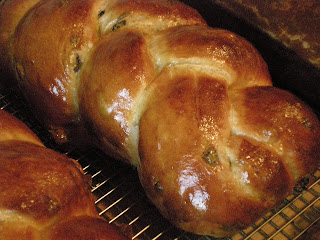 Brioche is not the bread I’d start with, but I am ever so happy to have gotten to the point of regularly making it.  It is demanding and magical.  It is rewarding even as you are learning.  And you are always learning.

Every week as I make the dough, I marvel.  Who could have imagined this in the first place?  So much butter and egg in a bread!  Because there is so much, many consider it a pastry rather than a bread dough.  And it can be used for pastries.  It recently became the base of trendy and pricey doughnuts.  It certainly has the pedigree, the ingredients and the work required to have such a special place.

Brioche developed in France over at least the last seven centuries, gradually becoming richer as the levels of butter and egg increased.  It was the “blessed bread” of the church in France then became the favorite of the aristocracy.  Just after America’s Revolutionary War, when the French peasants were starving and rioting because they could get no bread, one princess is said to have suggested, “Let them eat brioche.”  It was translated to, “Let them eat cake.”  And no, it was not said by Marie Antoinette.

But brioche really is an aristocrat of breads.  You start with either milk or water along with the yeast, sugar, salt and less than half your flour.  It’s a gloppy mess, about the consistency of a sticky pudding.  To this you patiently beat in the butter, the egg and the rest of the bread flour.  There’s almost as much egg as water and almost as much butter as egg.  And as you alternately add the egg and flour to complete the dough, it comes together.  As you knead it, the dough becomes elastic and begins to pull away from and “clean” the sides of the bowl.

And this is only the beginning of the preparation.  It has to be allowed to rise, punched down, then refrigerated and allowed to rise again overnight before being briefly kneaded, portioned, shaped into loaves or buns or whatever it is to become then allowed to rise yet again.  During this final rising, the loaves are brushed with an egg/milk wash three times.

It is worth all your work.  As the aroma comes from the oven, it is intoxicating.  When it is pulled from the oven, you see the bright brown sheen the brushing with egg and milk created and you smell all the goodness that has gone into it.  It almost begs to be eaten.

Brioche teaches you about a cooler beginning and slower rise.  The flour mellows.  The braids have more strength.  The loaves hold their shape and have better definition.  It is a happier bread.  It practically begs you to set a bit of dough aside to try something new.

Brioche teaches patience from beginning to end.  You get faster as you go along because you learn the right consistency for the butter - soft but not mushy, learn the developing textures, learn to take the time to fully incorporate the butter and egg and flour with each addition, learn to love a slower rise for the texture of the finished bread.

It is not so different from other breads in wanting you to wait until it is ready.  It just has so many more steps as you build the dough. Every step given the proper time makes the next step easier and quicker while hurrying through one makes the next step take longer.  If you plan to make brioche, you must allow about two hours from beginning the prep to the time you put finished dough into a bowl or tub to let it rise the first time.  But the next morning, when you take it from the fridge then shape your loaves, let them rise, then bake them, the reward is amazing.  Your patience is rewarded many times over.

As with so much in life, patience is the first tool of baking.  Without it, you can’t be a happy baker.