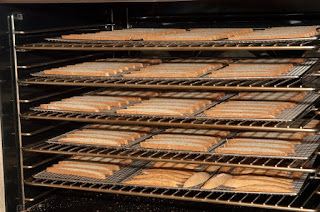 About a dozen years ago I began thinking about the biscotti I wanted to create.  A desire to make a citrus biscotti started the thinking process that led down the road to what would become the Bob’s Biscotti trio.  It was a longer road than I expected.  They often are.

Citrus was, in my mind, a slightly more feminine flavor.  So I asked myself, if this was to be designed with a woman in mind, what did that mean?  As I was pondering, my mother’s voice came to me with something she had said decades before.  It was the simple declarative sentence, “Bobby,” Maggie had said, "Women don’t gnaw.”  It took years to remember what she was actually talking about when she said it.  But it took only moments to understand what that would mean for the biscotti I would make.

What a journey this sent me on!

First came the job of trying recipes, one after another, looking for one that might give me a loaf of biscotti-quick bread that would do what I wanted it to do.

I’d baked biscotti to put in holiday baskets or just have some cookies to munch and share.  There always seemed to a battle going on between texture and thickness.  The thinner you sliced them, the more fragile they became and the more likely to crumble in your cup.  But slice too thick and they become too hard to take a bite without shoving the thing far enough back into your mouth to reach the molars.  You had to gnaw.  And “Women don’t gnaw,” kept running through my head.

Then I found a recipe for a biscotti made with white chocolate, ground with sugar and baked into the loaf instead of butter or oil.  It produced a higher loaf with a more open yet firm crumb.  And when a fine white chocolate is baked it, the richness and warmth to the palate shone through.  It sliced thinner, had an easy bite, and held together when dunked.

There were still obstacles to be overcome.  But the texture of the loaf was done.  More about resting and slicing, flavoring, mixing, and the intricacies of temperature to come as I continue this occasional blog.

Thanks for being here.  I look forward to your return.
Posted by Unknown at 11:50 AM