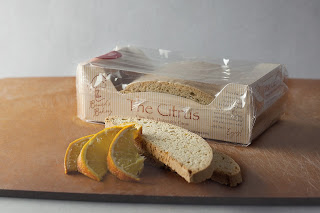 I don’t know how it is for others when they adapt and create recipes.  For me, it comes down to focus.

You concentrate on what your taste buds have to tell you.  You wait for the little flavors to appear below and behind the dominant ones.  You hold onto the aromas until they almost disappear.  You smell to learn the way they change.  You do it again and again.

You spend the time.

Somewhere in the back of your brain is the biscotti you imagine you’re going to make.  The scents, the tastes tell you where you are.  They point you toward your imaginary destination.  Sometimes they lead you down a dead end and you have to backtrack.  But they always lead you onward.

What The Citrus had to be was ‘burstingly’ citrus.  What she wouldn’t become was citrusy enough using lemon and orange juices.  They give lovely notes.  But they were lovely modest notes.  They had to dominate.

In her brilliant book, “In the Sweet Kitchen”, Dana Regan praised citrus oils for their ability to impart flavor and aroma - to give a citrusy ‘oomph’.  As an amateur baker, I’d never played with lemon or orange oil.  They’re not commonly offered in groceries.  You have to go looking.  I did.  What a revelation.

I tried the oils, using ¼ tsp per cup of liquid.  Wherever that advice came from, it was short.*  But the flavor was zesty and bright even though it was not insistent.  I tripled the amount, something Chef Regan recommends as a general rule in baking.

This was the birth of the The Citrus.  It finally had a bold enough flavor and aroma of lemon and orange to play with other flavorings - the accents that add interest and subtle complexity.  Orange juice gave the biscotti a flavor similar to “Dreamsicles”.  It thrilled my mother-in-law.  I liked it too.  But it didn’t match my imagined creation.  It dimmed the brightness.  Cognac didn’t.  It lifted and accentuated the citrus.  And spices with higher notes like cardamom and ginger contributed to the flavor rather than competing.  From there, it came down to balancing the flavors, adjusting them to hone in on the compromise of what my imagination had begun with and what The Citrus was becoming.

This was the actual beginning of Bob’s Biscotti - learning to let it tell me what it was capable of being. The Citrus was my teacher.  She remains so, more demanding in the mixing, more finicky in the baking, more exacting in the drying.  Even after ten years, The Citrus is always ready to remind me how human and fallible I am.  And you have to love a wonderful teacher.

Thanks for being here.  I hope you’ll take the time to comment and give my biscotti a review if you’d like.  I look forward to your being here again.

• Boyajian, the maker of the oils I now use recommends adding another ½ tsp per cup of dry ingredients.  If I’d had their recommendation at the start, I would have begun closer to the needed amount.  But the process I went through was what it was and led to the biscotti I make.
Posted by Unknown at 2:27 AM