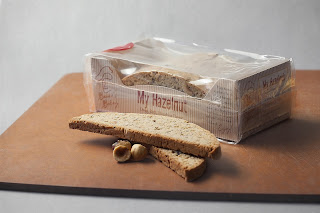 When introducing people to my biscotti, they often ask, “Which one is your favorite?” I answer, “How can I choose?  They are my children.”

And three very different children they turned out to be.

The Citrus was the first child.  She turned out to be my teacher, even though I had no idea this was to be part of her personality.  I understood the biscotti would have different flavors…and slightly different textures from the differences in ingredients, but I had no sense of how different their personalities could be.

If The Citrus was my teacher, the hazelnut biscotti was the stubborn child and a good deal more after we came to terms.

The problem began with the belief I was going to make was a cocoa-hazelnut biscotti.  I could imagine the flavor combination.  The biscotti couldn’t.

The hazelnut and cocoa didn’t want to be friends.  They both wanted to be king.  When hazelnut ruled, the cocoa faded away.  Let cocoa reign and hazelnut retreated into a corner.  Even using small amounts to barely change the balance, cutting the change in half then in half again didn’t get the hazelnut and cocoa to a common ground.

My preconceived vision had been beautiful.  And beautifully wrong.  If I was going to make a hazelnut biscotti, hazelnut demanded top billing.  He was to be the star.  Cocoa needed to find someplace else to hang out.  But hazelnut now needed a proper supporting cast.

I gave it extra low notes to compliment the richness of toasted hazelnuts and hazelnut oil and soften the higher notes of the hazelnut flour.  Large doses of dark rum and Madagascar vanilla were paired with only a hint of spices and a dash of orange zest and oil.  It became what it had demanded to be, a biscotto which has a butterscotch undertone that melds with roasted hazelnuts.  It became “My Hazelnut” and my second “child”.

It also became the most forgiving of the three biscotti.  The hazelnut oil gives it a different elasticity.  It handles better, comes together more quickly, stretches more easily, takes to shaping with less effort and maintains it through the bake.  As I slice, dry then package, it reminds me of what the biscotti should look like, most consistently producing a graceful arch.*

My Hazelnut is not without its simple demands.  The hazelnuts must be sorted, particularly after toasting.  Shrunken, shriveled, oily looking ones and those that have darkened excessively must be discarded.  It also asks me to remember to follow the recipe - remember to get the ingredients in, to add them in proper order, to take the time to fully mix them, to scrape the bowl and beater as needed, get the temperatures and times right - to be a proper baker.

It’s not a lot to ask when coming from such a well-behaved child.

* The oil also makes “My Hazelnut” the most susceptible to humidity.  For me, that means packaging can’t be put off.  For you, it means keeping the unused biscotti in a zip-type bag gets an asterisk, particularly in muggy weather.  If the biscotti stay out too long and lose their snap, re-crisp on a wire rack at 200 degrees for seven to ten minutes.  Remove from the oven.  Allow to cool before storing airtight.
Posted by Unknown at 7:18 AM