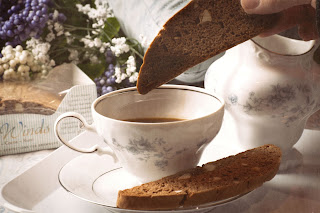 After the battles I had creating The Citrus and My Hazelnut, I should have been wary about what would happen with the third of the three biscotti I envisioned.  I wasn’t.  I can’t say with any certainty why I wasn’t, but I suspect it was the focus I had on what was becoming my “family” of cookies.  I knew my first two children.  I would learn to know them better, but I didn’t know how much I had yet to learn about them so I was filled with confidence.

It had taken shape perfectly in my mind.  All that remained was to bring it to life and to give it a name.

And so, I sketched out the ingredients.  I mixed, shaped and baked.  I rested the loaf, sliced then dried the slices.  Then tasted.  And my third biscotti was almost there.  The blending of the spices was ever so close.  All it took was a slight adjustment for the second test.  I never needed a third.

I gave it the name Trade Winds to reflect the spices and Tahitian vanilla, the cocoa and macadamias and rum - all flavors of the trade route.

It was the easy child.  It had come together quickly.  It was less finicky in the bake than The Citrus but not quite as easygoing as My Hazelnut.  It filled out the flavors I wanted to make.  It completed the “family” of biscotti.

Oh, there would be tiny changes to all the three biscotti as I found the right temperature, the right way to mix, the right balance of flour and egg, adjusted the temperature to the adjusted texture then made more small changes.  These small changes occurred over the course of a few years as I worked to get more uniformity from each bake.  This is what happened as my children “grew up”.

Now they are grown.  Now the only change is the slight adjustment of the amount of egg used to compensate for the weather and seasons of the year - the heat, the cold, the damp or dry conditions - what would be half-a-teaspoon or less for a single loaf you might make at home.

And now, the only thing that can keep my biscotti from being the beautiful cookies they grew into is the arrogance, foolishness or plain stupidity of the baker.  It’s what we humans are heir to.

I’ll tell you some of the foolishness I’ve experienced and lessons learned as this writing continues in the weeks and months to come.

I hope you’ll follow my blog and give me your feedback.  When you buy my biscotti, I know my baking is making your tastebuds  happy.  When you follow my writing, I know my words are satisfying your mind.